Over July 4th, 2012 I decided to launch a weather balloon with a camera attached.  I've always been interested in aerial photography, and the timing seemed right.  Below is a short 3 minute video showcasing some of the amazing shots the small camera took.

While I was very pleased with how the video turned out, I also learned several lessons for future launches.  In the hopes that you don't make the same mistakes as I made, I have put together this guide.  I hope it answers some of your questions, but if it doesn't, feel free to contact me!

While I always try to keep a do-it-yourself mindset, there are some things I don't have the ability to make myself.  Here is a list of the equipment I purchased, and some small notes on what it does and doesn't do.

This weather balloon was incredible.  If there was one part of this project that went 100% to plan, it was the weather balloon.  The latex balloon carried my payload and camera 100,000 feet into the air, and then burst exactly as it should have.  This is one part that I will not change in the future, and it's something I highly recommend.

The video camera survived more than I thought it ever would.  I was only hoping the SD card would come back in one piece, but was surprised instead to find the camera was in perfect working order. There was one problem I experienced with the camera: at around an altitude of 15,000 meters (~50,000 feet) the camera shut off because the batteries died due to the extreme cold.  For my next launch, I plan to solve this by putting a device like this

into an insulated cooler.  The cooler should keep the batteries at a reasonable temperature, so they can continue to power the camera well beyond its previous flight time. You certainly don't have to buy the Duracell product I linked to, but whatever you buy, it should be lithium-ion, so that it can survive in the cold.

GPS Tracking Device - Micro-trak AIO High-Altitude
This is the one device that saved my project.  The Micro-trak AIO is a radio equipped with a GPS so that you can track your balloon in real time, on the internet! It uses APRS (Automatic Packet Reporting System), which requires an Amateur Radio license from the FCC.  Getting your HAM radio license is extremely easy, it just requires a night or two of studying and then taking the test.  For more information on getting your amateur radio license, and where to take the test, visit arrl.org. The Micro-trak AIO allowed me to track my balloon in real time with updates every 2 minutes.  Sadly, it suffered the same fate as the camera though, and when it got extremely cold in the high atmosphere, it stopped reporting its position.  Thankfully on its descent the batteries warmed up again and the radio turned back on.  I was able to watch it drift into an abandoned lot, where I later found and recovered it!  It was only inches away from where aprs.fi was reporting it to be. The next time I launch the weather balloon, I will definitely use lithium-ion batteries in hopes of keeping the radio powered on throughout the entire flight. If you purchase your Micro-trak AIO from Byonics, it will come pre-configured.  You only need to add batteries and turn it on!

Helium - 100 - 150 Cubic Feet
Filling a weather balloon the as large as the one listed above takes a lot of helium.  I rented a large tank from a local welding supply store.  They charged me around $50 for the tank rental and helium, and an additional $50 as a security deposit, which I got back when I returned the tank.  I've always found welding supply stores to be helpful, especially if you share with them what you are doing.  The tank that I got was 120 cubic feet of helium, and was just enough to fill the balloon to get the lift I needed.  I would advice getting a tank with similar ratings or larger.  Some of the helium will leak out during the fill process, which I will talk about later in the article. Make sure you also pick up a regulator with the tank, so you will have some pressure control.  A standard nozzle used to fill party balloons will be handy as well.

Kite String / Rope - 75 - 100 Feet
I used 50 pound kite string to connect the balloon to the payload (the parachute was tied in between the two).  It is extremely important that you use kite string rated under 50 pounds, so that you do not fall under the rules of FAA's F.A.R. 101. It is much easier to do a launch like this if you do not fall under those regulations.  I will talk later about the FAA's rules and things to consider. I purchased my rope at Lowe's.

5 Centimeter Flexible Plastic Tubing (2 Inch Tubing) - ~2 meters long
I used 2 inch tubing to connect the regulator's nozzle on the helium tank to the weather balloon.  I prevented major leakage by using duct tape to connect the regulator to the helium tank. To get a snug fit around the 2 inch tubing I placed the stem of the balloon on to the tubing and then wrapped duct tape around both, and then secured it with a couple of zip ties (over the top of the duct tape, you don't want it so tight that you cannot remove the tubing!).

Soft Cloth Tarps or Painter's Tarps - Quantity of 2, around 2 meters squared
You want to avoid even the smallest of trauma to the balloon, including pebbles, stones, weeds, etc... so you should put a cloth or other soft tarp on the ground before opening the balloon's box and protective packaging. A second cloth can be used to hold the balloon on the ground before it is buoyant.

Everyone who is touching the balloon in any way should be wearing latex gloves.  No sharp rings should be worn around the balloon, and no one with excessive hair spray or hair gel should be near the balloon.  If you're going to put all this money into it, you definitely want the balloon to reach its maximum height!

Your recovery system is key to getting everything back, but it can also be extremely simple.  The parachute made for my balloon was made using fabric purchased at Walmart. I purchased 2 yards of fabric, and cut it into a circle. I also cut a hole in the middle of the parachute, about 4 inches in diameter. It was through this hole that the rope connecting the balloon to the payload was run.  Eight very small holes were cut evenly spaced throughout the parachute, and the holes were hemmed, and reinforced with a liquid stitch product. It looked something like the diagram below. I was very happy with the way this parachute worked for my balloon.  The payload had only extremely minor damage, and there were no scratches or signs of damage on the camera.

Step 3: Things You Need to Know About Contacting the FAA

With most scientific weather balloon launches, the balloon will fall under the FAA's F.A.R. 101. There is more paperwork associated with FAR 101, so I decided to keep my balloon under its specifications.  It was significantly more simple.  That being said, I strongly advise you to read over FAR 101 and become intimately familiar with what it says.  Read it over several times to make sure that you are following the law.  The last thing you want is your balloon to wind up on the news because someone suspects it to be dangerous.

While my balloon did not apply to FAR 101, I was advised to contact the FAA about it anyway.  The last thing I want to do is surprise some poor pilot and cause him to take evasive action because of my aerial balloon project.  When I called the FAA, the process was extremely simple because I had knowledge of what types of questions they would ask.  I would also advise you to call the FAA and file a NOTAM (notice to airmen).  The phone number I was advised to call was for the US NOTAM office at 1-877-487-6867.  Here are some questions you should have answers to before you call:
If the representative you are talking to isn't aware that your balloon doesn't fall under FAA's FAR 101, politely remind them that your balloon isn't applicable.  The person you are talking to is going to send out a notification to the local airports, so they are only trying to get the most detailed and useful information from you.

Most of these questions can be easily answered using some basic math, Google Earth, and the EOSS' extremely helpful calculator.

The payload is where you can become somewhat creative.  Keeping rule #1 in mind, be sure to make it as light as you possibly can.  I created my payload out of a small sheet of styrofoam.  I cut it into a 12 inch square box, held together with epoxy, duct tape, and a few screws. The radio's antenna stuck straight up out of the top, and the camera was attached to the side.  I cut out a small section in the side so that the camera would fit in and then "sandwiched" it using 2 flat pieces of plexiglass.  It was very simple, and very light, but able to withstand the tug and pull of the rope.  4 strings connected it to the main rope; they were tied off at the bottom and top, and were designed in an attempt to distribute some of the force that the balloon and parachute would exert.

I also labeled the payload in several places with the phrase "NOT DANGEROUS!", and the details of the project including my phone number.  While APRS was able to take me to the balloon, I did get a phone call confirming that it was safe on the ground! 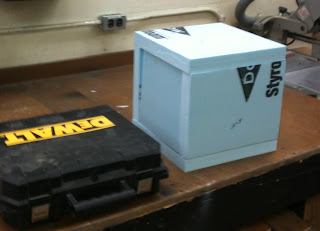 This is the day you've waited for.  Be sure that you start early in the morning so you'll have time to chase after the balloon if necessary. As long as you've got a bright day and a clear sky, you are all set to launch your balloon! Make sure you put down your tarp before unwrapping your weather balloon. Attach the helium tank's regulator to your balloon using the 5 centimeter tubing.  When filling the balloon, first put duct tape above the end of the balloon's stem to make the balloon fit snugly around the tubing.  Further secure the balloon by putting a zip tie around the duct tape region of the balloon and tubing.  Connect the parachute between the balloon and the payload, going directly through the hole in the middle of the parachute.  Then when the balloon has been filled, secure the rope holding the parachute by using a reasonable amount of duct tape and zip ties.  Make sure the parachute has been tied off at all 8 outside points at approximately 6 feet above the payload.  It should look something like the diagram below (when launched!) 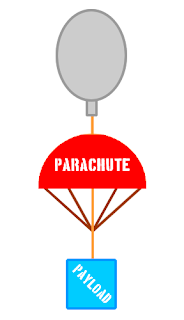 Now comes the fun part! Track your balloon on aprs.fi, and travel with it to its destination! Good luck to you, and be sure you post the video it takes online!  Below is a video showing the full launch and video to give you some idea of the launch process.

If you have any questions, feel free to leave them as comments here, or post on the amateur radio reddit for more help!

Thanks to the following people for helping out!